A look into how Rack works

This weeks writing topic is to understand how Rack works. Rack provides a standardised interface with the web server and is used by a number of web frameworks including Sinatra and Rails.

I had previously been aware of Rack, and how it was the back bone of Rails, but hadn’t put in the hard yards to understand it. This post outlines how it intuitively works and hopefully removes some of the mystery surrounding Rack.

Imagine that your web application is made up of different layers. These layers will have different responsibilities from authentication, to adding content. A web request then goes through these layers and the resulting response is returned.

Having a standardised set of rules that each layer must comply with allows us to develop “new” layers that will “just work” with the existing layers as long as it complies with this standard. This standardised rules is know as Rack. As it turns out, the standard is remarkably simple to implement.

The Rack specification requires that the middleware must have a instance method called call and unless it is the last middleware in the queue must stores a reference to the next middleware. The ‘call’ instance method takes an environment hash as a parameter, and returns an Array with three elements.

I found walking through an example helped me understand how it all fits together. The code below has been modified to aid understanding. If you want to see an unadulterated version then head to the file /lib/rack/builder.rb of the rack gem.

The Builder.new receives a block that specifies which middleware is used in the rack stack and in the order that they are applied . In the case above, the #use method adds the Header and Body middleware. These middleware are required to have a call instance method, and to store a reference to the next middleware in the queue.

The last middleware in the queue is a special case since it doesn’t need to store a reference to the next middleware. It gets added to the rack stack using the above run method. Its only requirements is that it has a call method. If you are wondering, this can be a lambda object, as seen in our example, since that gets executed with a call method.

How rack gets used?

We have finally arrived at how Rack gets used in our application. A server request comes in from our website. The server then requests a response from our application by executing the following code. This is the entry point into our application, or ground zero.

The above code returns the application response (status, body, headers) to the server and also creates the initial rack stack 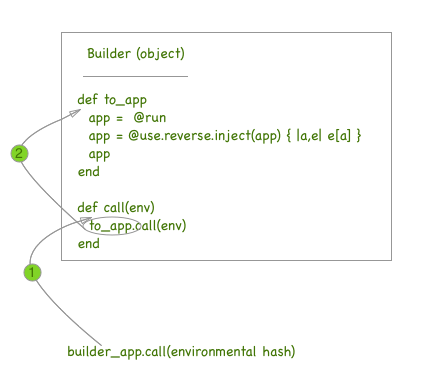 In our example, the builder_app references an instance of the Builder. This specifies the middleware stack while it is instantiated (see above Specification Middleware)

In our example, there are three middleware layers: Header, Body and Lamba object. The @use.reverse.inject step ineffectively combines the code as Header.new(Body.new(app))) using ruby’s inject method.

The last middleware (lambda object) has no need to store the next middleware in the queue. It only is required to have a call method that returns an array of status, headers and body. 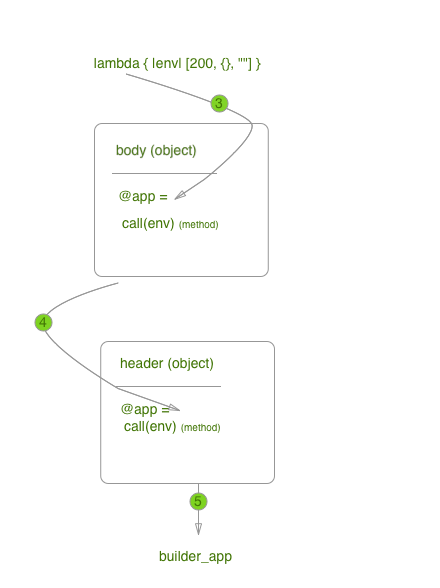 After the code builder_app.call (environmental hash) has created the rack stack it then executes the call method against it. The header object#call is initially executed, but within that method it kicks off the call method of the next middleware using its stored reference @app (step 7) 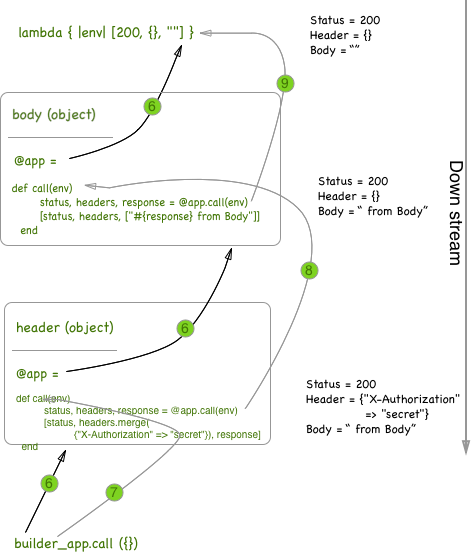 Phew ! The callmethod, for the last middleware object, completes and the process steps backwards through the call sequence. At each stage, the status, header, and body is returned from each call method. From the lambda#call, the focus returns to the body#call method and on that methods completion to header#call and finally the application response is sent back to the web server and closes the circle.

At each of these layers, the middleware can manipulate the status, header and body fields on the down stream and modify the environment variables passed up stream to higher middleware layers.

The resulting response from our program is : status: 200, header: {"X-Authorization"=>"secret"} and body: " from Body"